This endearing double act who manage to be both childishly ludicrous and strikingly thoughtful at the same time.
Bruce Dessau – Evening Standard 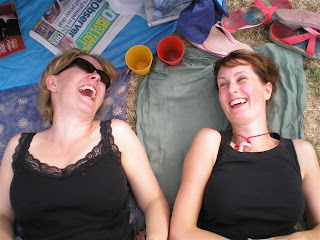 Faultless and Torrance’s shows are a rich mix of the inappropriate and absurd - ludicrous dilemmas, cunning wit, and riotously unlikely physical doings. They welcome you to their world and then lock the door behind you. A world where the logic is perfect but never makes sense. A world of heart rending pathos and side splitting funniness. A world with jokes in. Faultless and Torrance have a growing following for their warped but innocent shows. Join the growth - see them on the comedy circuit or hear them on BBC Radio.


Faultless and Torrance In A Night of Shining Armour

A Night of Shining Armour is buffed, oiled and ready for battle. Two Florence Nightingales battle for supremacy, gazelles go down the pub, elasticated mittens wreak havoc, and stanley Gibbons presents his Amazing Stamp Collection. Also, an important breakthrough in the search for a cure for the common cold.

Faultless and Torrance in The Three Musketeers

Two idiots play all four of the three musketeers. See Faultless and Torrance shoe-horn Dumas’ beloved story into an hour of absurd physical comedy and ridiculous plot twists, attempting to save king and country with the assistance of poorly attached facial hair. New meaning is given to ‘One for All, and All For One’ as the two actors play everybody in the King’s court and present all the duels, intrigue and adventure you could wish for. Having completely re-invented this classic tale for the stage, they breathe new life into myriad characters from the three musketeers to D’Artagnan, the villainess Milady de Winter and the dastardly Cardinal Richelieu.

The Faultless and Torrance Extravaganzera 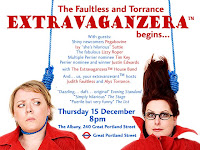 Faultless and Torrance take their Faces/Off

How do you play snap with a pack of dogs? Can the wheelbarrow ever lose the race? Who wins a game of Sardines? Tangling the rules and losing on a technicality, Faultless and Torrance are about to find out there’s a snag…
The foolhardy pair plunge headlong into a world of games that even an idiot could win, and end up on a chaotically hilarious polar exploration, where Faultless’ only chance of survival is to eat Torrance’s tuna baps.
If they can only find out how to stop playing charades…
“Impressive, charm and charisma, a strong double act, the delivery is
faultless” Three weeks
“A deft blend of physical humour and comic timing. A very funny script”. Festival Radio
“Deep down, wet-your-pants funny” Teletext

They've sniffed you out (no offence) and ridden right into the campfire of your lives, so make room in your hearts - hell, your going to need a bypass! The ladies are livin' proof that Country and Western ain't dead. In fact, no-one is dead. They can prove it. They look like a million dollars (approximately £600,000 sterling). They sing like angels. So snuggle up close like cattle in a mincer and warm your hands on them. These gals wanna raise a little dust tonight. And the funds for a good lawyer.
“Original… daft…dazzling” Evening Standard

I'm an actor, writer, comedian and all round technophobe.